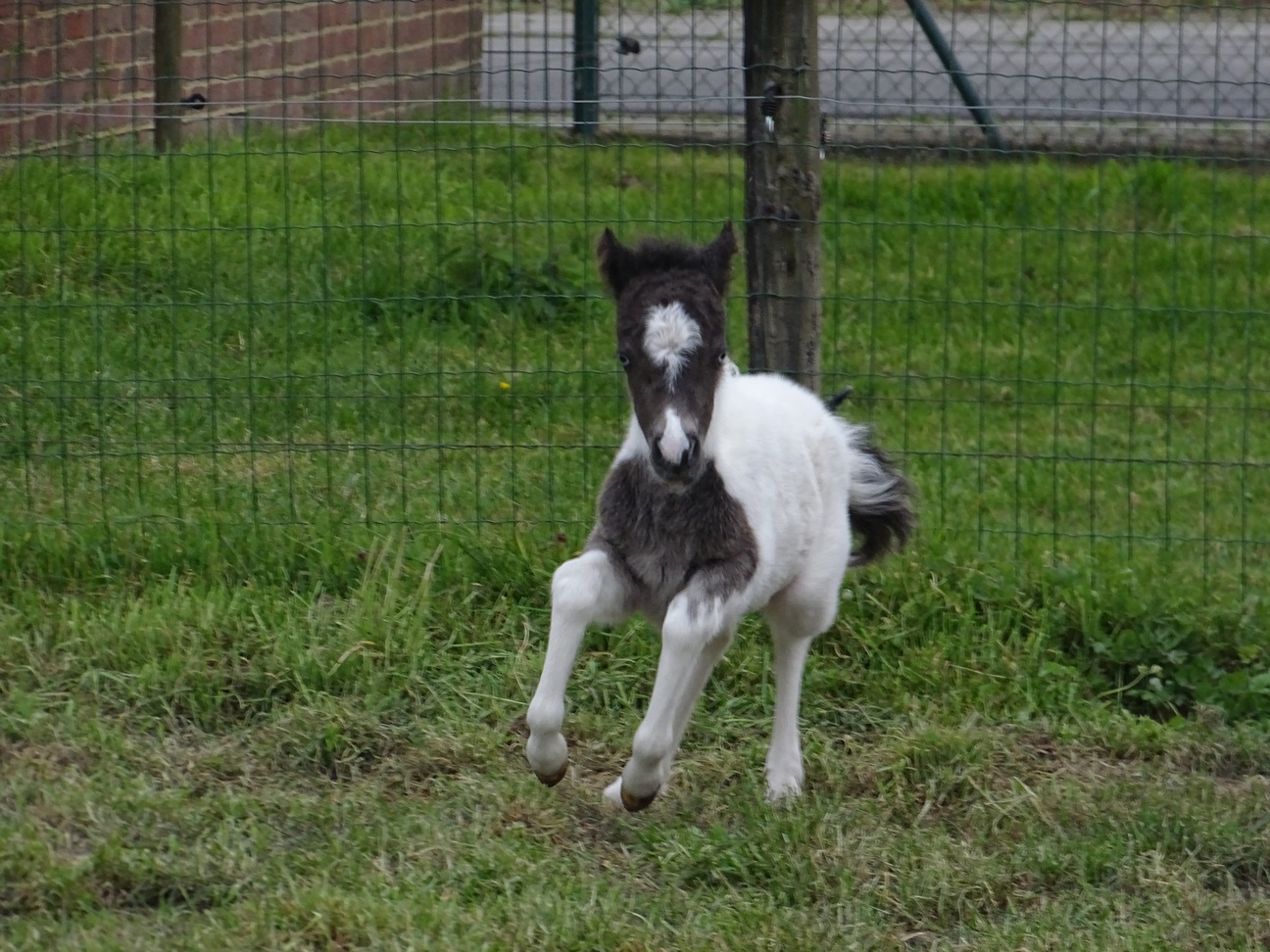 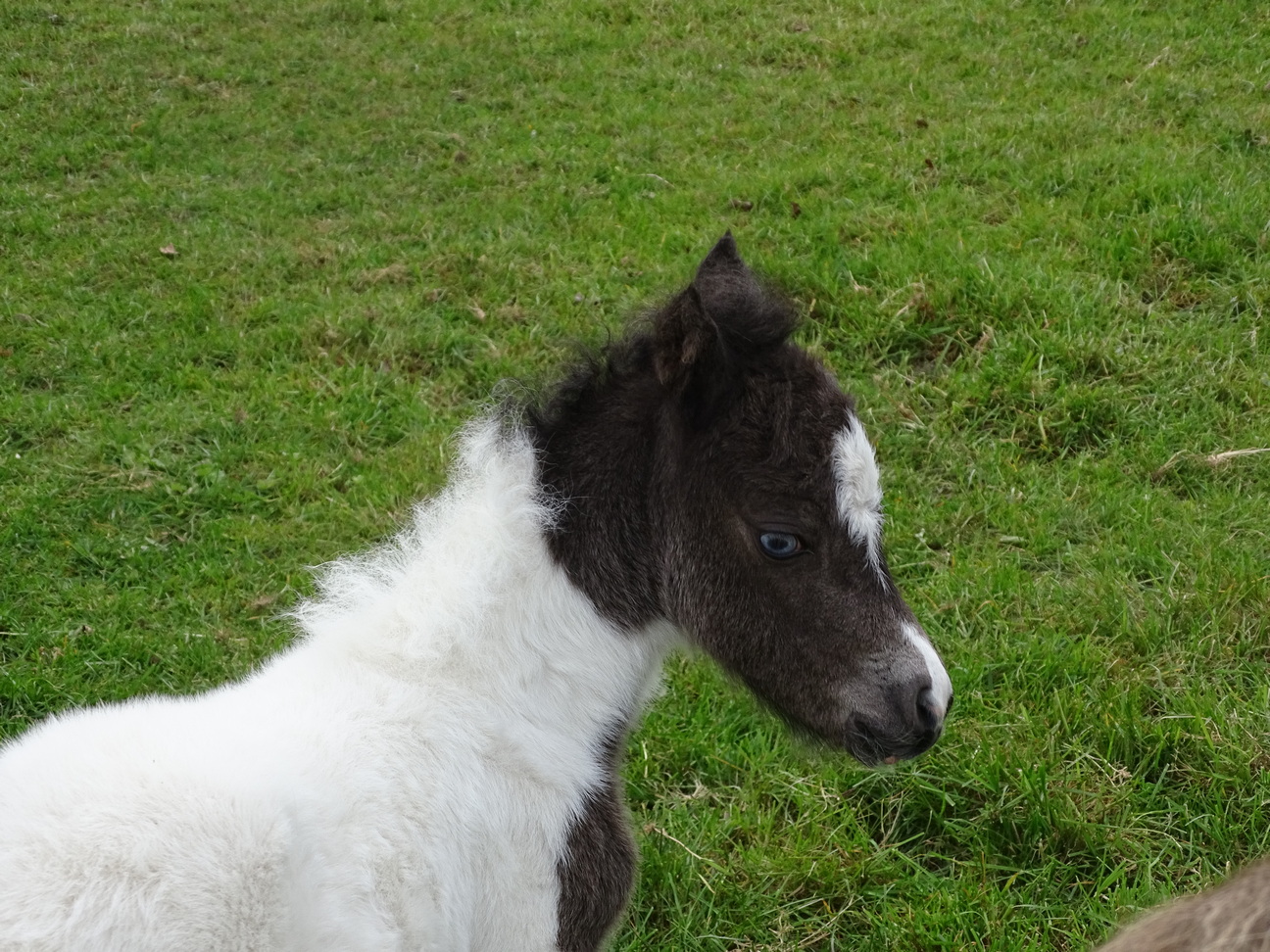 Our Sandy did it again! This time a beautiful filly with again an arabic head, long legs and a very special color: black tobiano with blue eyes. Again Sandy makes my dreams came true!


Milli's sire is the beautiful stallion  SSF Velvetbucks Phaeton
This stallion is just everything a stallion must be! He himself achieved very good show results, he received a high first premium from both the NMPRS and the BMP studbook. His father is the mutiple world champion Libertymeres Velvet Buckeroo, who himself is sired by world champion Little Kings Black Velvet. Black Velvet is a son of world champion and legend Boones Little Buckeroo. Phaetons mother is a daughter of the world champion Lucky Four After Dark Spotacular. Also on that side only world champions. Speaking of breeding security!

Milli's mother is our first premium AMHA mare JS Let Me Entertain You (Sandy), a beautiful silver dapple splash mare.
Sandy has an impressive pedigree: Her father is Cross Country Take My Breath Away, a beautiful silverbay overo stallion owned by Erica’s Tiny Trotters,which more than enough has already proven himself in the show ring. He was already Grand Champion and even won the Hall of Fame. This stallion is still in America. The father of Cross Country Take My Breath Away is the National Champion Lazy ‘N Red Boy, one of the founders of the overo bloodlines and a son of the famous Rowdy. The mother of Taker, Cross Country's Star Dust, is a Lazy ‘N Red Boy daughter, so there is a bit of inline breeding on the super good Rowdy bloodlines, which is very popular in America. Sandy's mother is the beautiful buckskin mare Erica’s Worth the Wait, owned by Stal Berkenhof. She comes from great champions. Her father is Little Kings BT Buck Bandito a beautiful buckskin pinto stallion who has won many titles, including several times Grand and Reserve Grand Champion and Champion of Champions. Bandito's father is then Ima Boones Little Buckeroo Too, grandson of the legendary Boones Little Buckeroo, which in the past also proved enough.

Milli's color dna: Agouti: a/a - Red factor: E/E - Tobiano: T/nT - Splash: n/Spl, which means that she is a black tovero. She is homozygous black, so she can never pass on the red gene. And she carries the splash and tobiano gene.

Milli is registered with the AMHA, AMHR, BMP and NMPRS. She was born with a BMP certificate, so she can take part in the BMP classes. At the NMPRS she is entered in the main studbook, since both her parents are also studbook approved. With such a pedigree and coming from 2 first premium parents, we expect a lot from her in the future! Milli is continued by us. 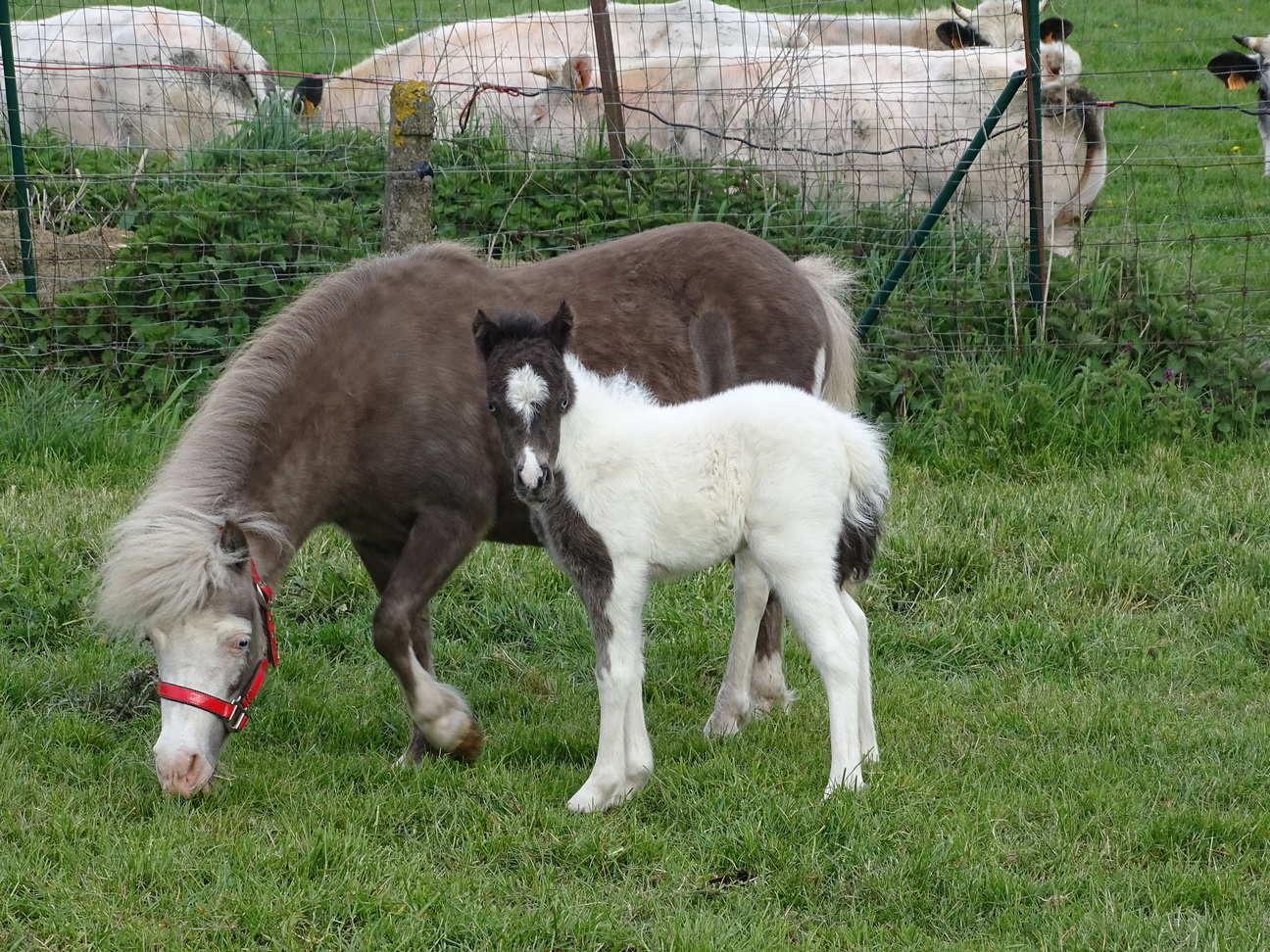