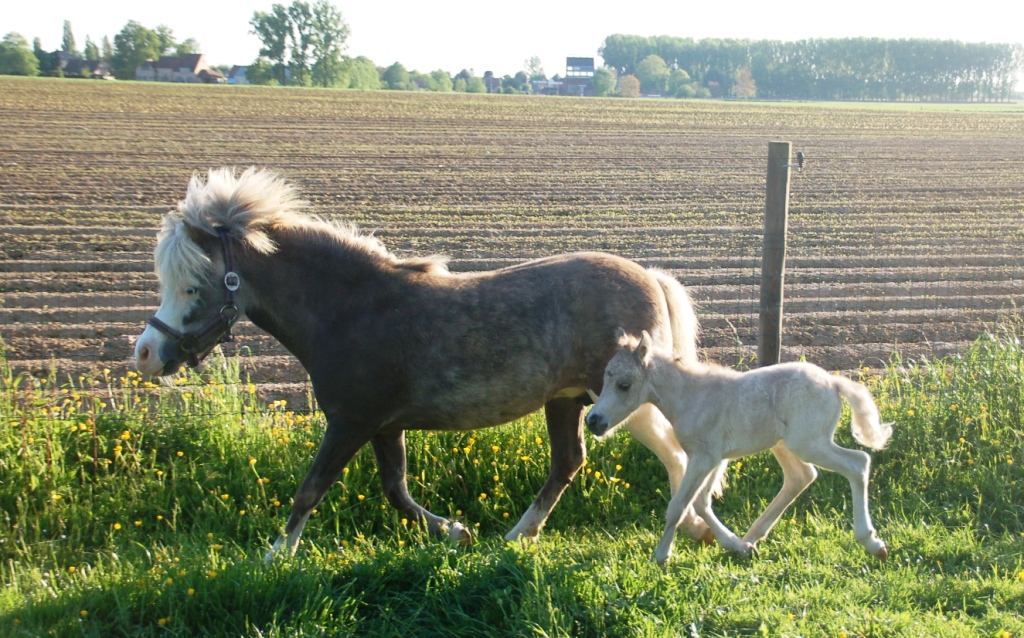 We were on a concours when Sandy gave birth to her second foal, exactly two years after the birth of her first son First Magic. Luckily we had some friends who wanted to keep an eye on, which our thanks! This time it has become a beautiful silver buckskin girl, with a small snip and a white rear foot, which nevertheless might point out that she has the splash gene inherited from her mother, even though she does not have blue eyes. She was tested on this and yes, she carries the splash gene.

When I saw her for the first time, it was love at first sight! That arabic head, those long stilts, those beautiful proportions ... this was where I, as a breeder, always dreamed of! Our Sandy gave us only two foals, but they are both very much in my taste!


Specials father is our own stallion SKS Em Pacs Selu, a beautiful cremello first premium stallion who only can pass palomino or buckskin to his foals. Special has thus become a buckskin, the silvergen she has inherited from her mother Sandy! Selu has a very good pedigree with known names such a HCM Bucks Em Pac. Em Pac was in America U.S. National Top Ten Reserve Champion. When NMPRS Em Pac achieved three times a first premium and so he became superstar and was declared preferent thanks to his descendants who always do very well. Em Pac has the famous Boones Little Buckeroo as ancestor. Also Selu's mother Pecan Groves Blonde Ambition did it well in her younger years in the show ring in America. Then she was flown to the Netherlands, where she brought several foals in the world. She also wears the famous Boones Little Buckeroo in her bloodlines. Selu is what is called double bred Buckeroo, a line breeding that's in America like to be seen.

Specials mother is our first premium AMHA mare JS Let Me Entertain You (Sandy), a beautiful silver dapple splash mare.
Sandy has an impressive pedigree: Her father is Cross Country Take My Breath Away, a beautiful silverbay overo stallion owned by Erica’s Tiny Trotters, which more than enough has already proven himself in the show ring. He was already Grand Champion and even won the Hall of Fame. This stallion is still in America. The father of Cross Country Take My Breath Away is the National Champion Lazy ‘N Red Boy, one of the founders of the overo bloodlines and a son of the famous Rowdy. The mother of Taker, Cross Country's Star Dust, is a Lazy ‘N Red Boy daughter, so there is a bit of inline breeding on the super good Rowdy bloodlines, which is very popular in America. Sandy's mother is the beautiful buckskin mare Erica’s Worth the Wait, owned by Stal Berkenhof. She comes from great champions. Her father is Little Kings BT Buck Bandito, a beautiful buckskin pinto stallion who has won many titles, including several times Grand and Reserve Grand Champion and Champion of Champions. Bandito's father is then Ima Boones Little Buckeroo Too, grandson of the legendary Boones Little Buckeroo, which in the past also proved enough.

Specials colordna: Agouti: A / a - Red Factor: E / e - Cream: Cr / Ncr - Silver: Z / nZ, Splash: N / Spl which therefore means that she is a silver buckskin splash overo with a red gene. Although she has no blue eyes, she carries the splash gene!

Special herself is a unique foal: she is beautifully built, really has the right proportions, long and slender legs, a beautiful neckline on it and an arabic head! And what she can move, just not normal!! Special is registered with the AMHA, AMHR, BMP and NMPRS. She was born with a BMP breeding certificate, so she can participate in the free BMP categories. At the NMPRS she is in the main studbook, since both parents are pedigree certified and approved. With such a pedigree and coming off two first premium parents, it's not unlike this is a 'special' horse! Special will be further held by us. We expect a lot of her in the future! 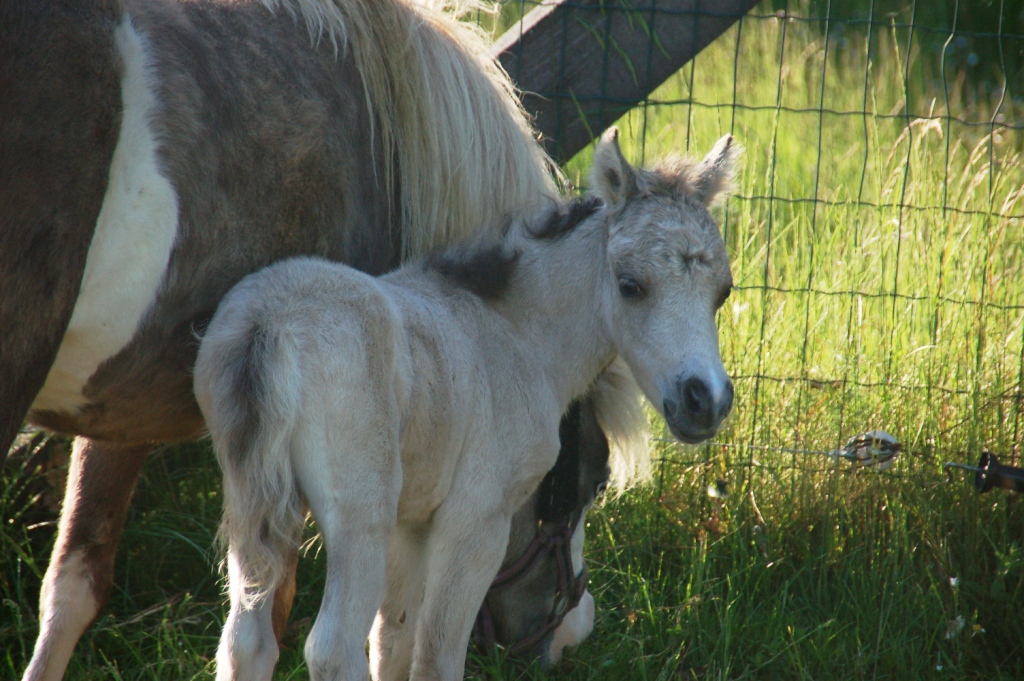 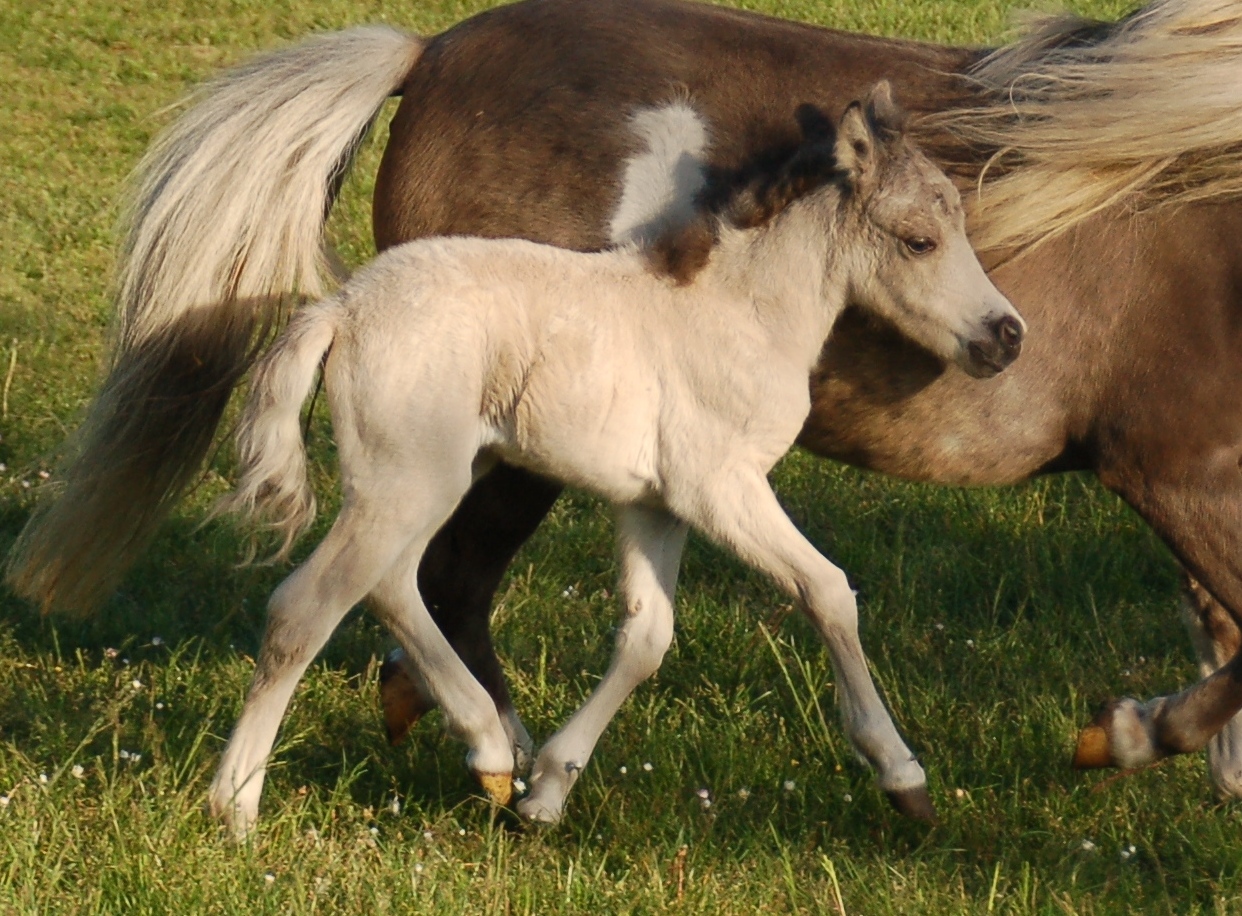 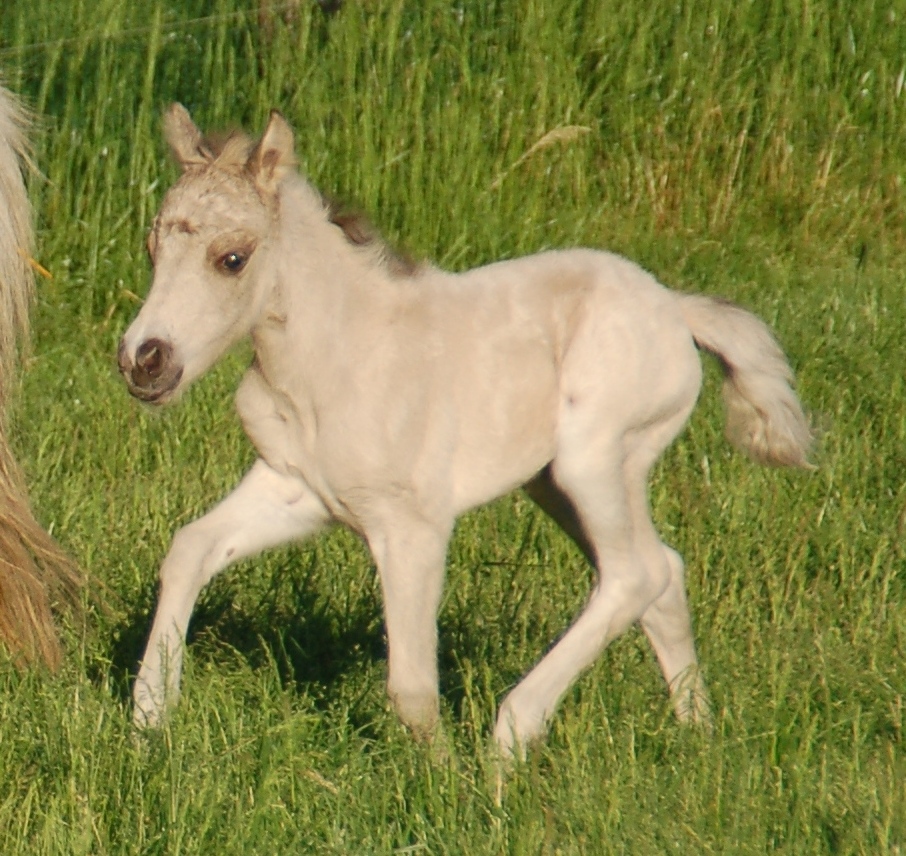 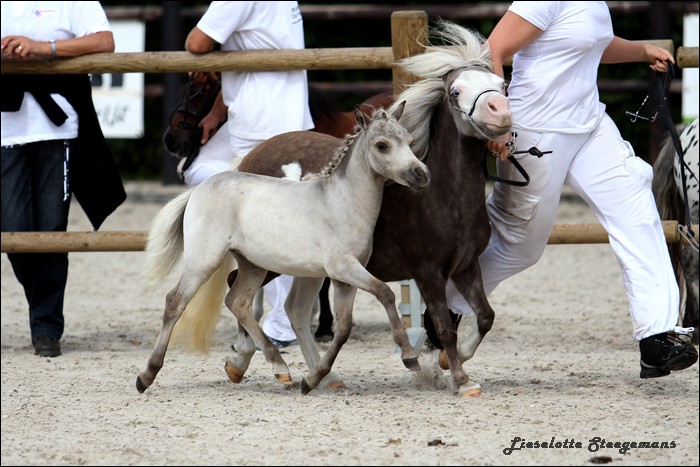 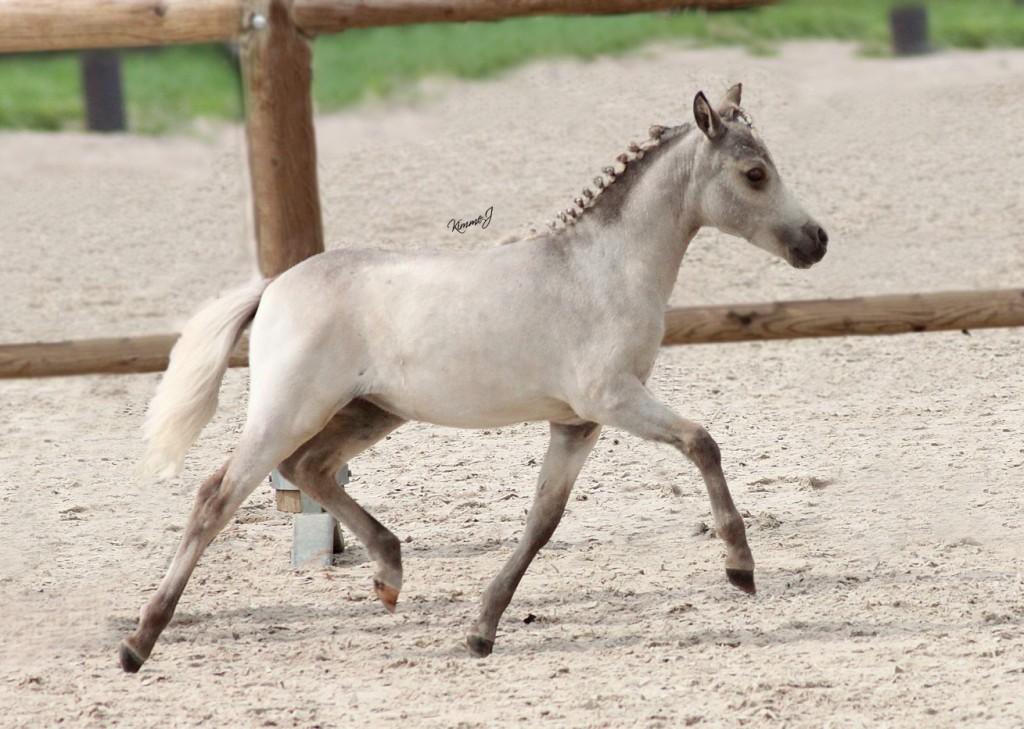 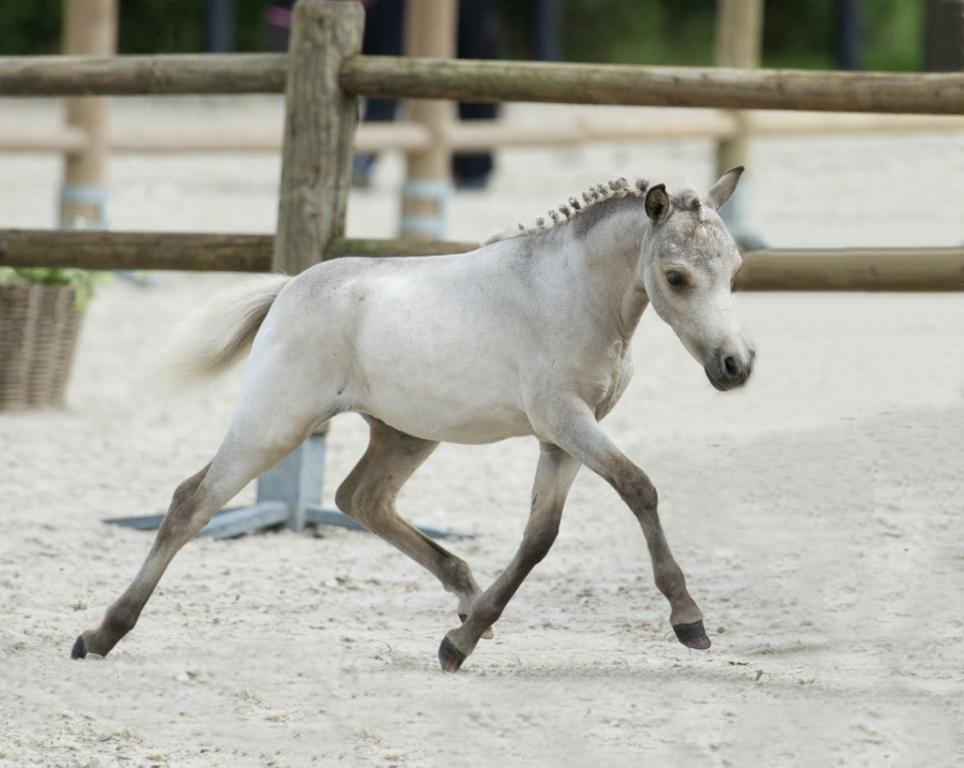 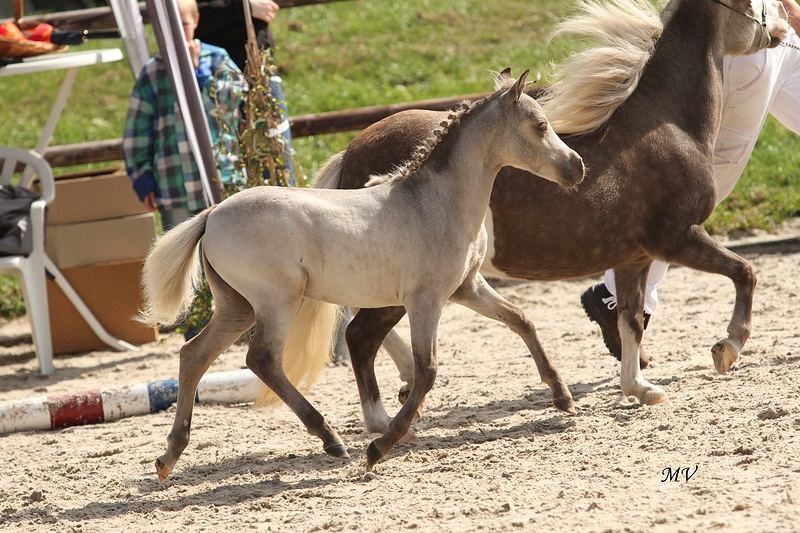 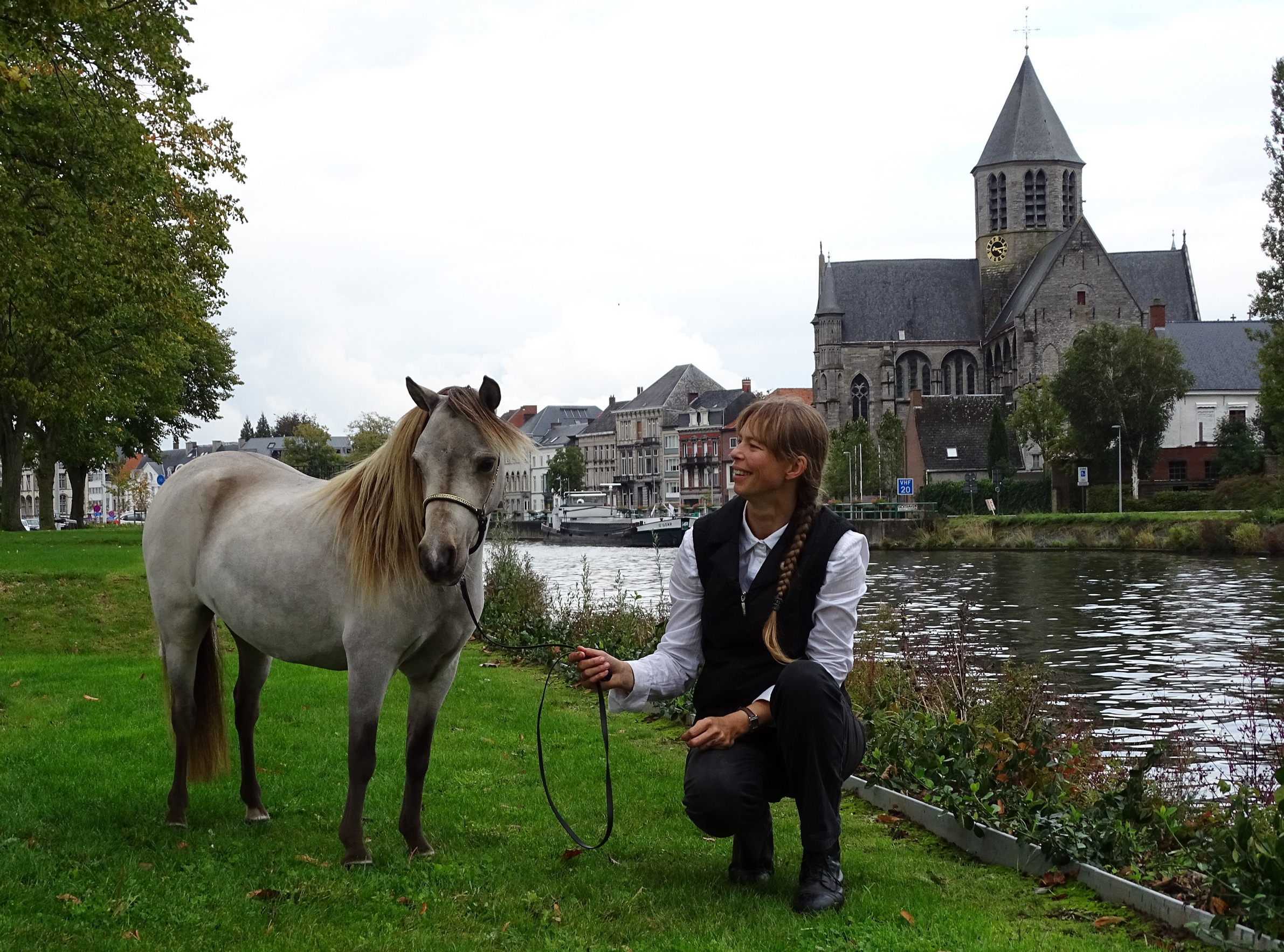